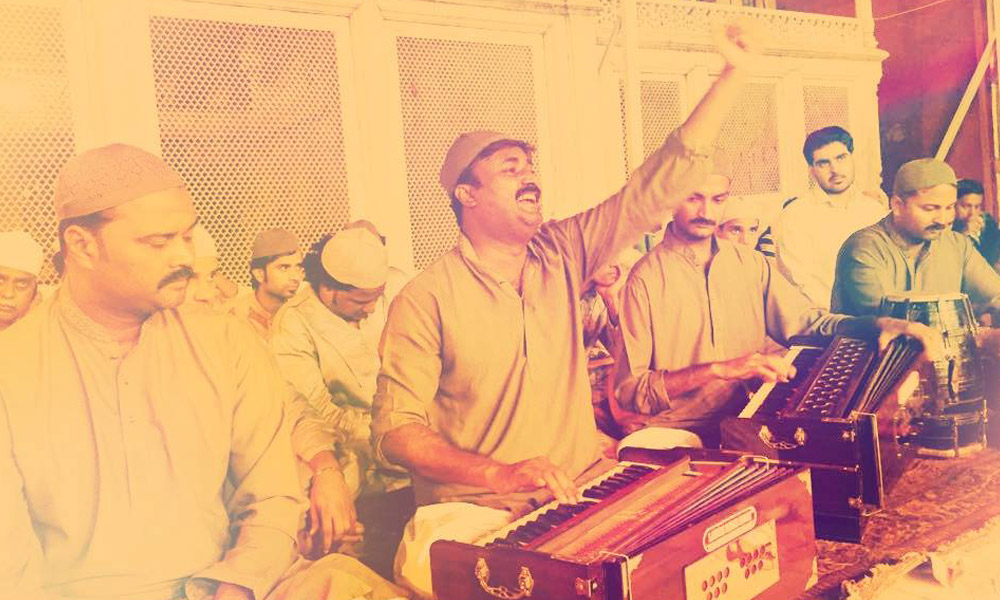 Saami Brothers are a group of accomplished vocalist and worthy custodians of the Traditional Qawwali as exemplified in Khyal of the performance Hazrat Ameer Khusrau and Ustad Tanras Khan Sahab – of the Delhi / Qawwal Bahche Gharana.

The group are the sons of the much acc laimed Maestro Ustad Naseeruddin Saami. They are well – versed in several classical genres, currently performing as a traditional (Riwayati) Qawali group 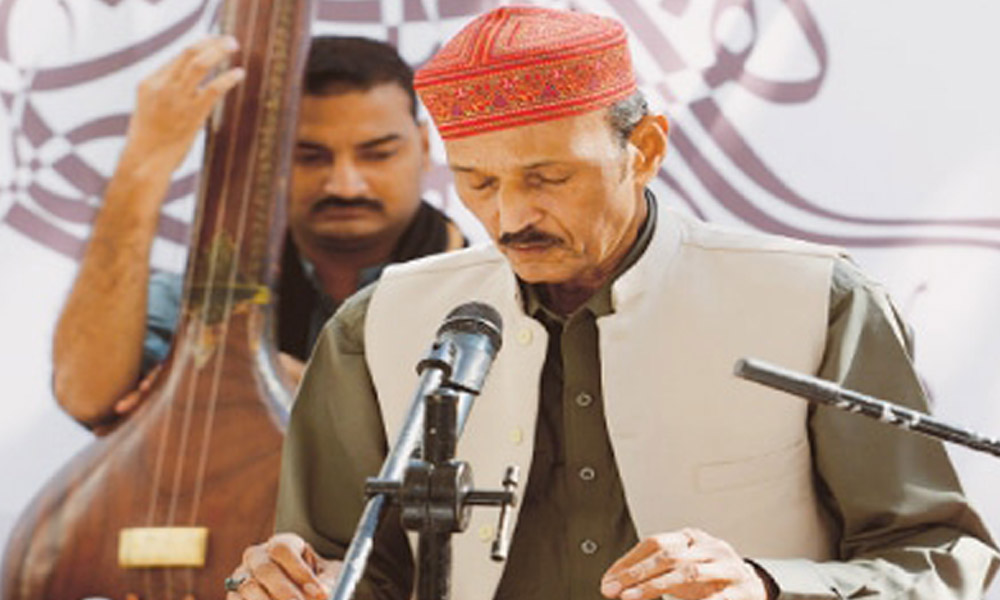 The name of Naseeruddin Saami needs no introduction in the field of music. His ancestors founded the school of music known as the “DELHI GHARANA”. His forefathers were associated with the Darbar of Hazrat Nizamuddin Auliya. His ancestor MIYAN SAMATH had the privilege of being the disciple of Hazrat Ameer Khusro.

Naseeruddin is a strict follower in the style of his family tradition-keeping ‘Sur’ as the most important component of his singing. His singing is peaceful and calm. Heartfelt rendition of the raga, manifesting the emotions which are mentioned in the bandish is one of the main aspects of Khyal Gaiki, in which he excels. He shows his versatility by also singing, Sadara, Thumri,Tarana, Dadra and Ghazal.

An introduction to the enigmatic, iconoclastic 15th century Bhakti-Sufi poet, Kabir, through storytelling, commentary, poetry and songs. The songs are in dialects of Hindi and the entire narration will be in English.

Vipul Rikhi is a singer, poet, storyteller and translator, immersed in the oral traditions of Kabir and other Bhakti and Sufi poets for over a decade 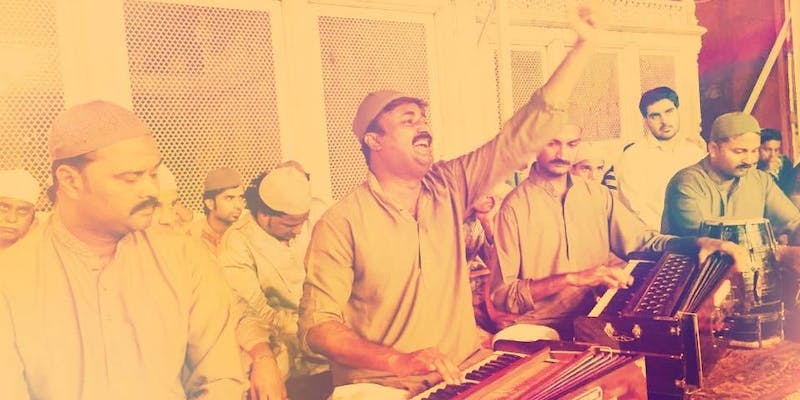 Saami Brothers are a group of accomplished vocalist and worthy custodians of the Traditional Qawwali as exemplified in Khyal of Hazrat Ameer Khusrau and Ustad Tanras Khan Sahab – of the Delhi / Qawwal Bahche Gharana.

The group are the sons of the much acclaimed Maestro Ustad Naseeruddin Saami. They are well-versed in several classical genres, currently performing as a traditional (Riwayati) Qawali group. 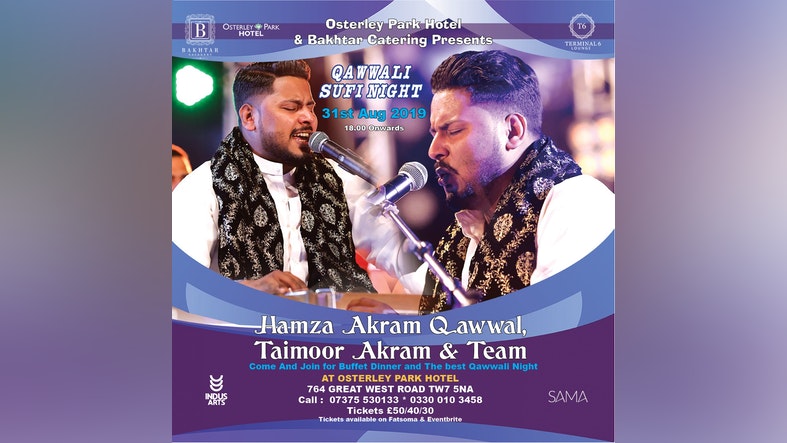 Hamza Akram Qawwal & Brothers, grandsons of the revered Munshi Raziuddin, have been acclaimed for their riveting interpretations of qawwali, the ecstatic improvisational Sufi vocal tradition.

This award-winning ensemble represents the 26th generation of the seven centuries-old Qawwal Bachon ka Gharana of Delhi founded by Saamat bin Ibrahim, the first qawwal of the subcontinent and principal student of mystic Amir Khusrau.

The Anuraag Collective is the coming together of a fluid, eclectic set of musicians,veterans in their own genres of music. Anuraag (composer and lead vocals) breathes life in the priceless ancient Indian philosophies as they manifest themselves in this modern-day context. Strong influences of Sufism and Hindustani Classical Music melt together, effortlessly with luscious Jazz and Neo Soul influences.

Sadir or the invitational performances of the 17th to early 20th century Southern India, were given by highly trained, hereditary, professional dancers, and their musician troupes in the royal durbars and sumptuous salons of rajahs, nawabs and other wealthy sponsors, often including among their guests, the officers of The Raj or British India.

It will celebrate historic achievements and contemporary diversity of South Asian Dance in the UK and pose crucial questions to stimulate, steer and secure the future of British Asian dance as part of the UK’s ever growing dance landscape. The five day festival will cover a range of events – including performances, master classes, workshops from training to artist development and other contemporary factors that are shaping South Asian dance creation & distribution

Progressive Carnatic fusion band from Bangalore. ’MishraM’ is an amalgamation of the western genres of music like Rock, Metal, Jazz, Reggae and Electronic music centered around the Indian classical music.

Shared Values is a festival of South Asian art music, contemporary, classical & traditional that seeks to showcase the achievements of non-South Asian musicians who have wholeheartedly adopted the aesthetic values of this music and emerged as accomplished performers. We believe that the breadth and depth of these artists’ with their adoptive musical culture can only be put in perspective when they are given an opportunity to share a platform with leading indigenous performers. This is a festival to project that South Asian music is universal, welcoming and inclusive. (click on the artist list to book online, click on venue for directions).

Sitar virtuoso, Nishat Khan has an impeccable international reputation and the north indian is regarded as one of the towering performers of the pre-eminent instrument of Indian classical music.

He returns to London to perform at the prestigious Union Chapel, accompanied by tabla player Pandit Sanju Sahai and with it’s “infinite and imaginative variety”, as declared by The Guardian, this is truly to be a magical evening.

The family of Qawwal Najmuddin Saifuddin group trace their ancestry back to the 13th-century and are considered today the leading singers of the Sufi Qawwali tradition. Their songs are of thousands of years of mystic poetry, which have been passed on from generation to generation. The songs, which constitute the qawwali repertoire, are in a number of languages. Those from the classical period are in dialects of north India like Brajbhasha and Awadhi. These dialects continue to have huge influence on qawwali in other languages. There is a rich tradition in other languages like Urdu, Punjabi, Persian and Saraiki.

The Indus Festival, is a series of performances in celebration of the classical and contemporary arts of South Asia. We are presenting a number of artists in collaboration with organisations from the East region. This will be the basis for all future work of Indus Music. We propose to celebrate The Beatles’ trip to India which transformed the perception of Indian music in the West. Their historic meeting with Pandit Ravi Shankar remains to this day the key moment in the history of this music in the West.